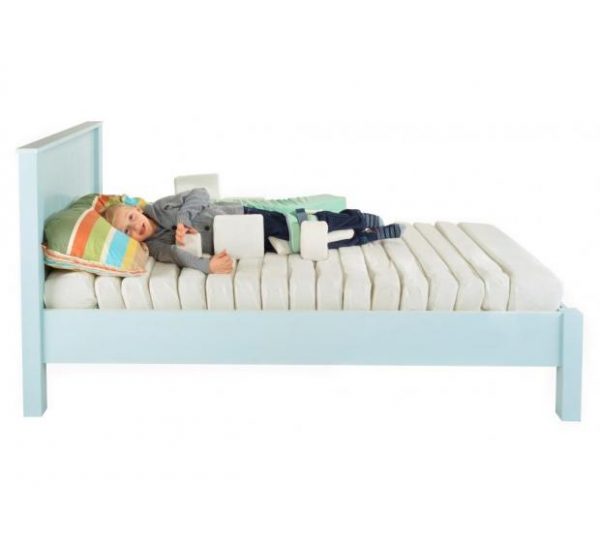 Night-time positioning should be of the same high quality as day time positioning. The importance of 24 hour positioning has become widely recognised over the last few years, as the continuation of good positioning throughout the day and night promotes improved skeletal development and better quality of life. Current thinking is that neglecting proper night-time positioning will take away from the benefits of any postural support given during the waking hours.

Dreama is a key part of any 24 hour postural management programme. Recognising that abnormal and posturally destructive tone is present 24/7, the Dreama system follows on from support offered by conventional positioning. Utilising a variety of available support pads, the system can be configured to support even the most complex of postures.

Supporting at risk limbs and reducing tonal spasms, the Dreama contributes towards more recuperative periods of rest, which in turn has a positive contribution towards minimising the risk of muscular skeletal deformity. Dreama can be used as a preventative system or to reduce the risk of further postural deterioration, and is therefore appropriate for any age. Who is Dreama suitable for?
Dreama is suitable for a great range of users with only a few exceptions (see below). It can be used as part of a 24 hour positioning programme with children or adults of any age. Dreama is particularly useful for those who, without the proper support, are likely to alter their position involuntarily and find themselves unable to readjust their posture so they are comfortable again. It can also be used in the care of older people, both those who are bed-bound and those recovering from operations such as hip replacements. Some examples of conditions where Dreama may be a useful therapy aid are:

Who is Dreama not suitable for?

Dreama is not a restraint. Individual risk assessments should be carried out to ensure the user’s safety. Dreama is not recommended for ambulatory individuals who are not cognitively aware enough to assess their own ability to transfer in and out of the positioning system.

Background: David is a 7 year old who suffers from severe quadriplegia due to Cerebral Palsy and Heart Disease. He has little control over his limbs and severe postural problems that result in the shortening of his hamstrings, requiring treatment by Botulinum injections every six months. He sleeps in a ‘wind-swept’ position with the right hip adducted and internally rotated. Although he is fitted with a corrective hip abduction brace he is unable to tolerate this at night. David also has a scoliosis developing.

During the day, David uses a seat, standing frame, wheelchair, abduction brace and leg gaiters to help his posture. The family have not had any success in finding any corrective night-time solutions until they agreed to test the Dreama™ 24hr positioning system. Their search is particularly urgent as David suffers at night by getting into uncomfortable positions. Attempts to put David to bed in his brace result in sleepless nights and vomiting if in supine. Such attempts also make him irritable at bedtime and he cries before going to sleep. Description of the product trialled: In October David’s mother agreed to try the Dreama™ 24hr positioning system. She says “I went into this trial with an open mind and a “we’ll see” attitude as past experiments had disappointed me”.

David’s therapist hoped that David’s night-time posture could be both corrective and comfortable and that David and his mum could get a good night’s sleep. After using the Dreama™ for four weeks David is starting to show a considerable amount of change in many areas.

General and physical benefits: With the Dreama™ David sleeps in a good position for his posture which is improving. He is able to relax and feel comfortable and has good hip abduction which is beginning to help correct the curvature of his spine according to his mother.

His Therapist states that hip and knee extension is achieved with good abduction stretching the gracilis and sartorius muscles as well as his adductors. David’s spinal and pelvic alignment is also easier to achieve. He sleeps better and for longer periods making him physically less exhausted during the day. Medical and general health: David was due for his next treatment for his hamstrings a couple of weeks after starting to use the Dreama™. His consultant was so impressed with the state of his hamstrings at that point that he postponed his next Botulinum injection for another 3 months.

Emotional benefits: David goes to bed very well now. He is a far happier child at bedtime and if he is moved, or the sheets changed during the night, David manages to go back to sleep quickly and sometimes isn’t even disturbed at all. The simple and easy to use mattress system means by placing the Dreama™ mattress on top of the existing mattress, it brings David higher up and means less bending for his mother. The individual covers are useful when David is very sick at night. Only changing the soiled part rather than the whole bed is much easier and less stressful for both David and his mother.

Family life: Before using the Dreama™ the family were unable to make plans to go out too often as David would need to sleep during the day, but now he sleeps better at night he goes out for longer periods and only sleeps in the daytime if he’s really exhausted. The fact that David didn’t sleep well meant that the rest of the family also suffered from sleep deprivation. David and his Grandad especially enjoy going to football matches.

Mum’s verdict: The family are very surprised by the effects of the bed and the fact that no other bed has met their needs. They hadn’t expected it to work as nothing in the past had, but are totally amazed at the progress David has made. His posture has improved dramatically, he’s sleeping better, and as long as David’s happy then so is Mum!

Consultant Paediatrician and Physiotherapist’s Verdict: The kit looks quite effective and may be helpful for prevention of hip adduction / subluxation problems and maintenance of trunk symmetry if tolerated.

Conclusion: In general the family’s routines revolve around David. They all suffer from interrupted sleep and daily routines depend on how much energy everyone has. Testing the Dreama™ has given the whole family improved sleep and much more energy for the daytime, indicating that the family can lead a more normal, active lifestyle than before. His hip posture is also being maintained now with a combination of using the Dreama™, the Botulinum injections and daily physiotherapy input.

There are no reviews yet.