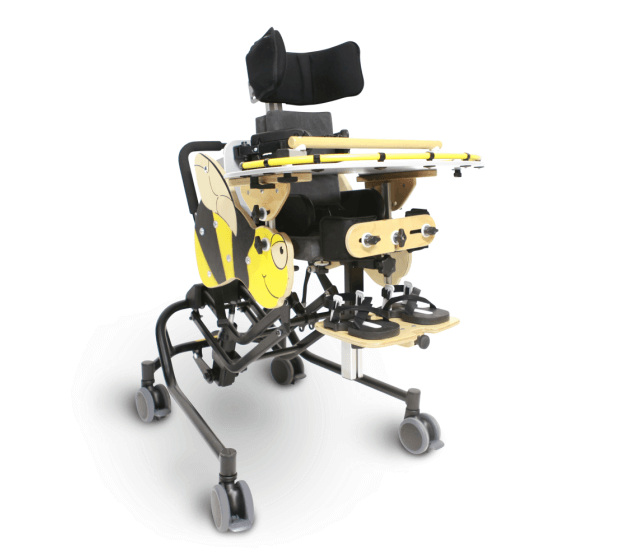 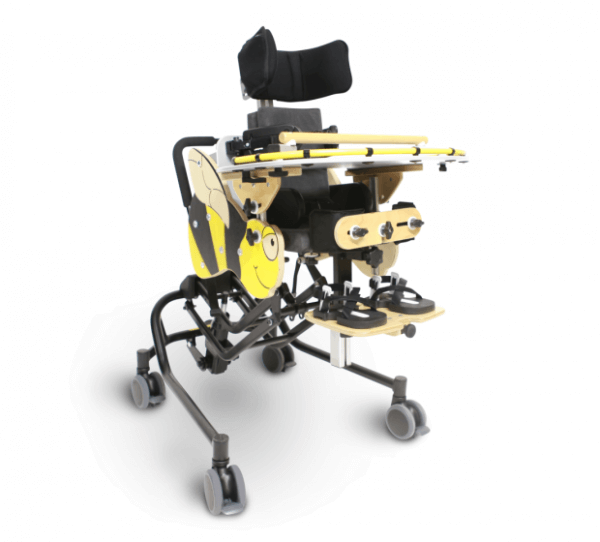 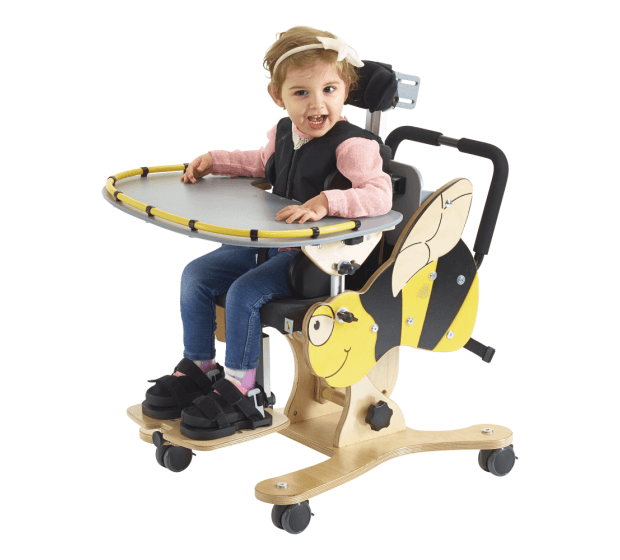 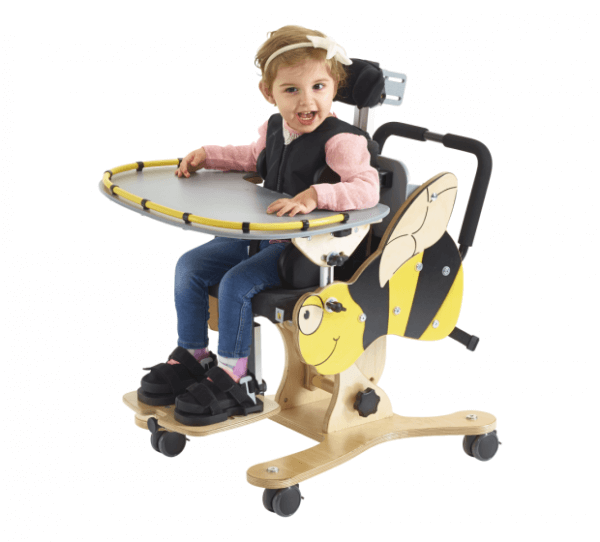 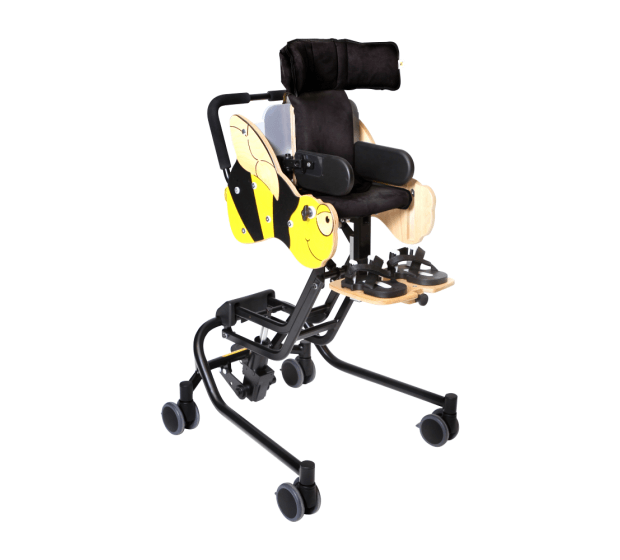 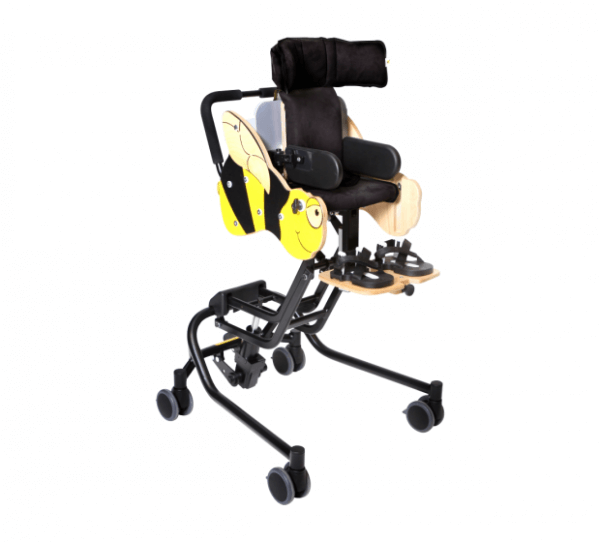 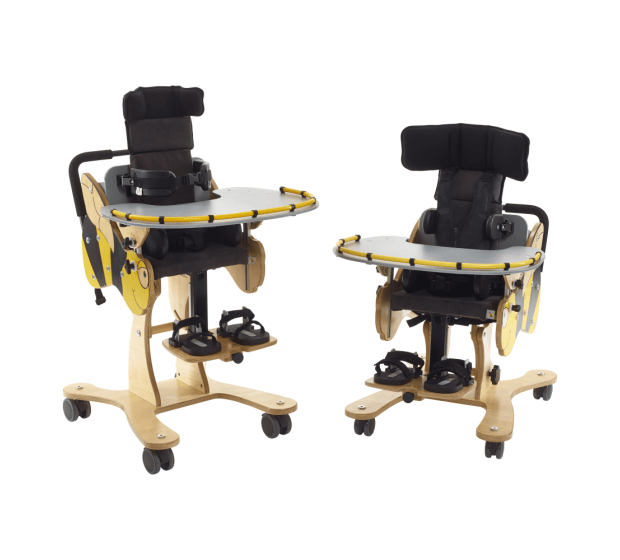 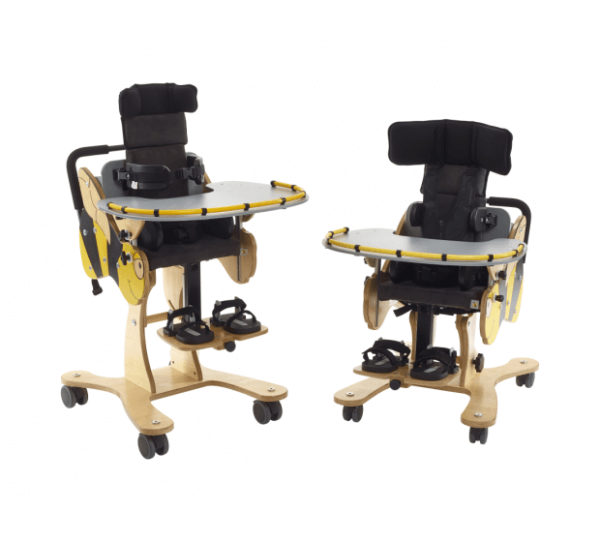 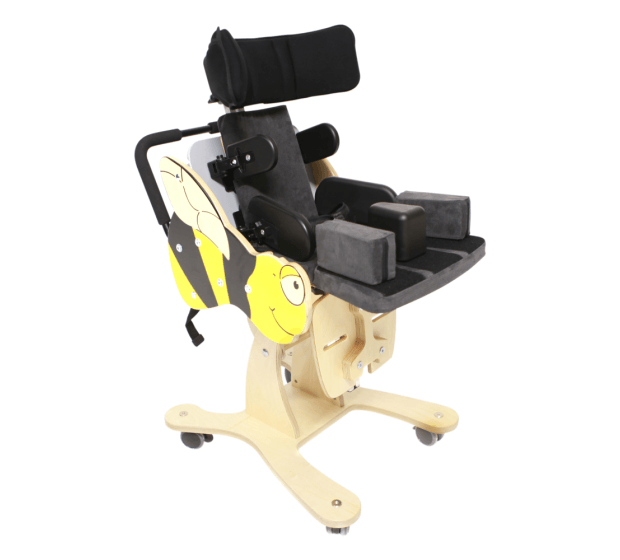 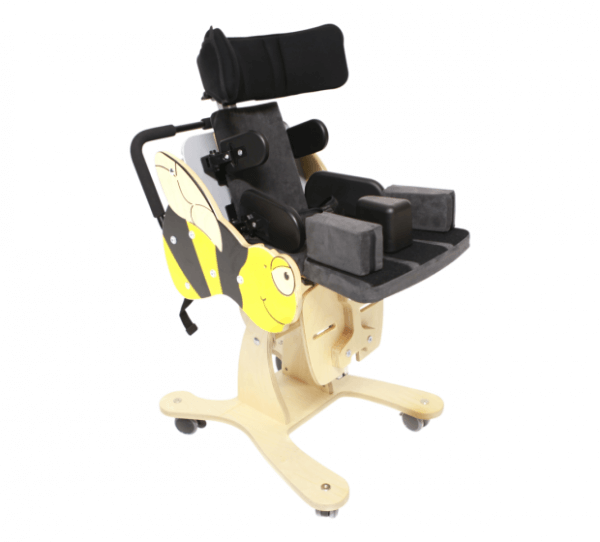 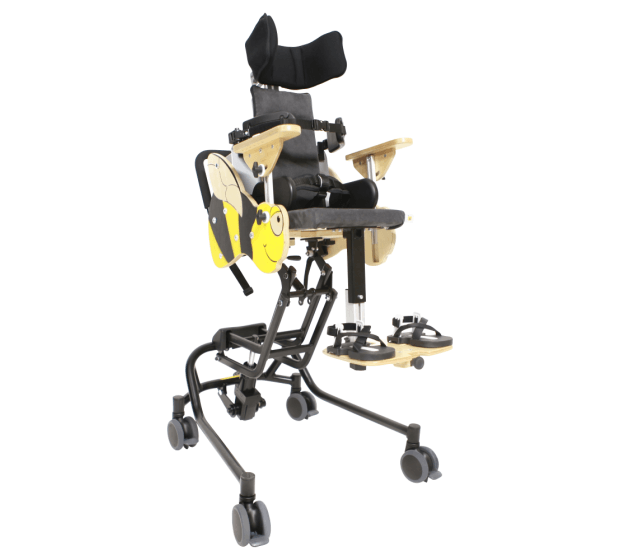 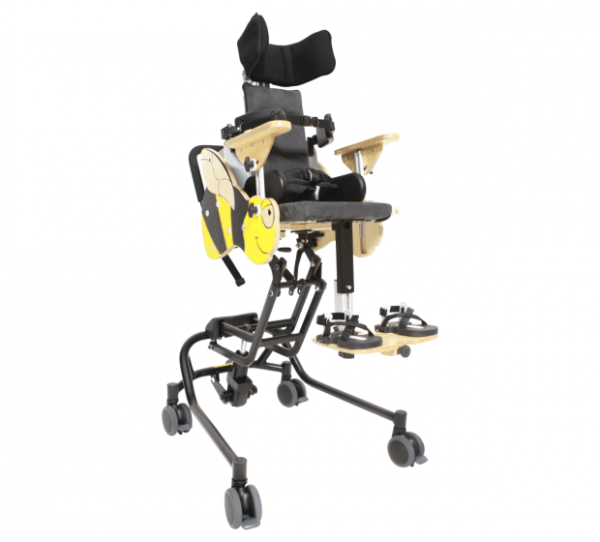 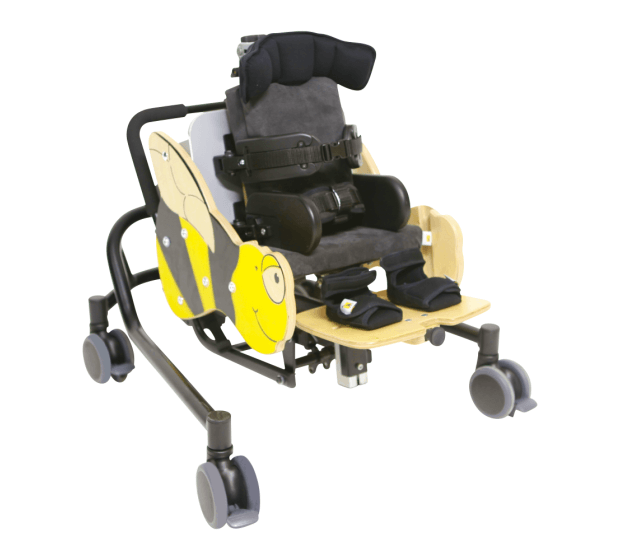 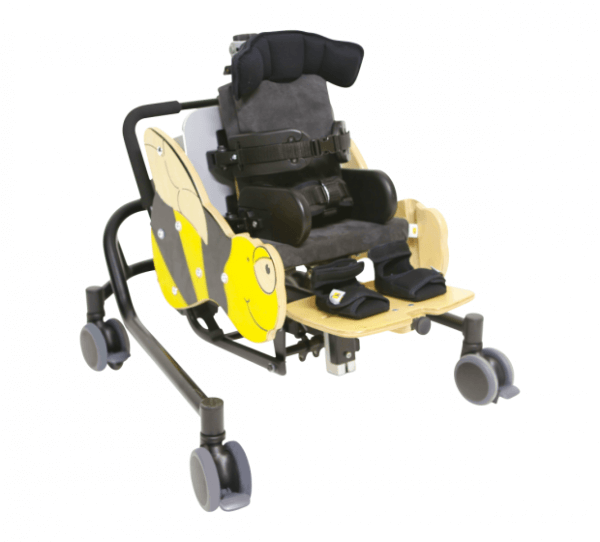 Ideal playful and gentle introduction to supported seating
Seating system styled specifically to appeal to very young children and their families, and developed in conjunction with therapists and carers.

Bee provides an outstanding level of versatility through a comprehensive range of fixed and height adjustable bases, along with a wide variety of head, trunk, leg and foot support options.

This means each Bee can be exactly tailored to the needs of any individual child. Adjustable back angle and tilt in space options alongside the ability to accommodate babies as small as 4 months right through to children of around 5 years results in maximum functionality, flexibility and style. 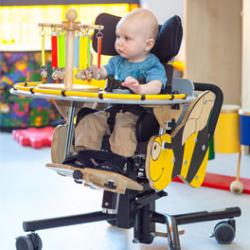 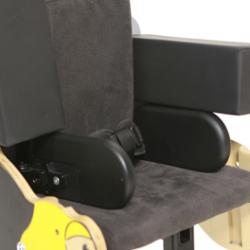 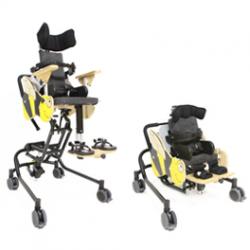 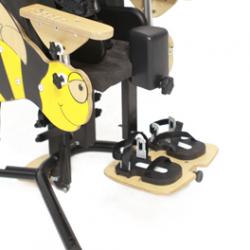 Jenx Bee Instructions for Use 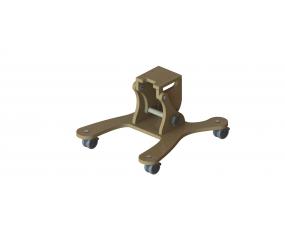 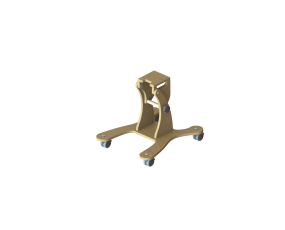 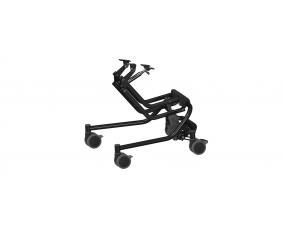 Why start seating so young?

Seating is one of the first milestones of child development.  It has many medical, social and psychological benefits.  Utilising accesories such as  the long leg facility allows children with postural needs to mimic those postures adopted whilst gaining sitting balance.   Children’s skeletons are still very soft and easily deformed through poor posture, therefore the earlier proper support can be given, the greater the chance of a positive outcome for the child’s posture.

The Bee has been designed to be small enough to accommodate children who are smaller in stature due to being born premature and who may present complex seating needs.

Which base is best for me?

This depends on what you want the chair to do and also needs to take into account your budget and the family environment that the chair is going into.

The Bee Wooden Base options:  These offer a fixed low or fixed high position, with a minimal footprint and are the most cost effective base for the Bee.

The Y Base option: Our most versatile and popular option, this goes low enough to fit under the majority of nursery and school tables, encourages peer height group interaction and raises high enough to comfortably sit at a dining table.  All with the added benefit of no manual handling for the caregiver.

“Grace’s first piece of specialist equipment was the Jenx Bee chair. We were so anxious that when they brought it to our house, it would feel like an industrial sort of contraption. But it was such a welcome sight and perfectly age appropriate for our little girl. We enjoyed it for a very long time before she graduated up. In fact, we miss that wonderful little chair!”

Background: Jac is two years old; he was born prematurely at twenty eight weeks and diagnosed with Grade Four Intraventricular Haemorrhage; which is a bleeding into the ventricular system of the brain and causes ventricles to be enlarged because of the accumulated blood. At four months old he was referred to a physiotherapist, with abnormal tone. He then presented with increased tone in all four limbs, more so on the left side than the right, with poor trunk control and asymmetrical posture of the head, tilted to the right. At eighteen months he was diagnosed with Cerebral Palsy and began attending weekly physiotherapy sessions at the Child Development Centre. Mum reported difficulty with feeding when starting to wean, due to his poor posture in a standard high chair; he would just repeatedly fall to the right side. At twenty months old Jac began to sit independently, but without support at the pelvis he remained asymmetrical, leaning to the right.

Description of assessment and general health benefits: Jac was assessed in the Bee Seating System for use at home, with a lap belt, hip guides, thoracic supports, head rest and neoprene booties. The trunk support given by the chair enables Jac to maintain his head in midline and decreased the extensor pattern that he displayed when placed in the seating position. He was able to bring both of his arms forwards to play when previously he tended to retract the right arm.

Emotional benefits: Jac became a much happier boy during mealtimes and started to tolerate longer times sitting in his chair as it was clear that he felt a lot more supported and comfortable. Jac had a position that he was comfortable in which meant that he could play with his toys happily. Before this was difficult for him as he was on the floor and was unable to sit independently, it was also difficult for him in his standing frame as he found playing in supine difficult because he would push back into extension and was then unable to bring his hands into midline. There have been massive practical and family life benefits too; mum has reported that she was able to use both of her hands when feeding Jac, rather than using one hand to prop him up and then struggling with her free hand to feed him. Jac was able to join in with mealtimes at the breakfast bar with his parents, which is a brilliant development in the level of interaction and inclusion he gets, he is also now able to play in a supported and safe position, mostly independently.

Conclusion: The Bee Seating System has provided a supportive chair for Jac that has enabled him to play and feed in midline. It has met the family’s needs due to its height adjustment and ease of use. As Jac has progressed, the thoracic supports have been removed as he no longer needs them, and only uses the hip guides and lap belt for support, which is a very important development for his posture. All in all the Seating System has helped to make Jac a much happier, relaxed child when seated.

There are no reviews yet.

Be the first to review “Jenx Bee Seat” Cancel reply